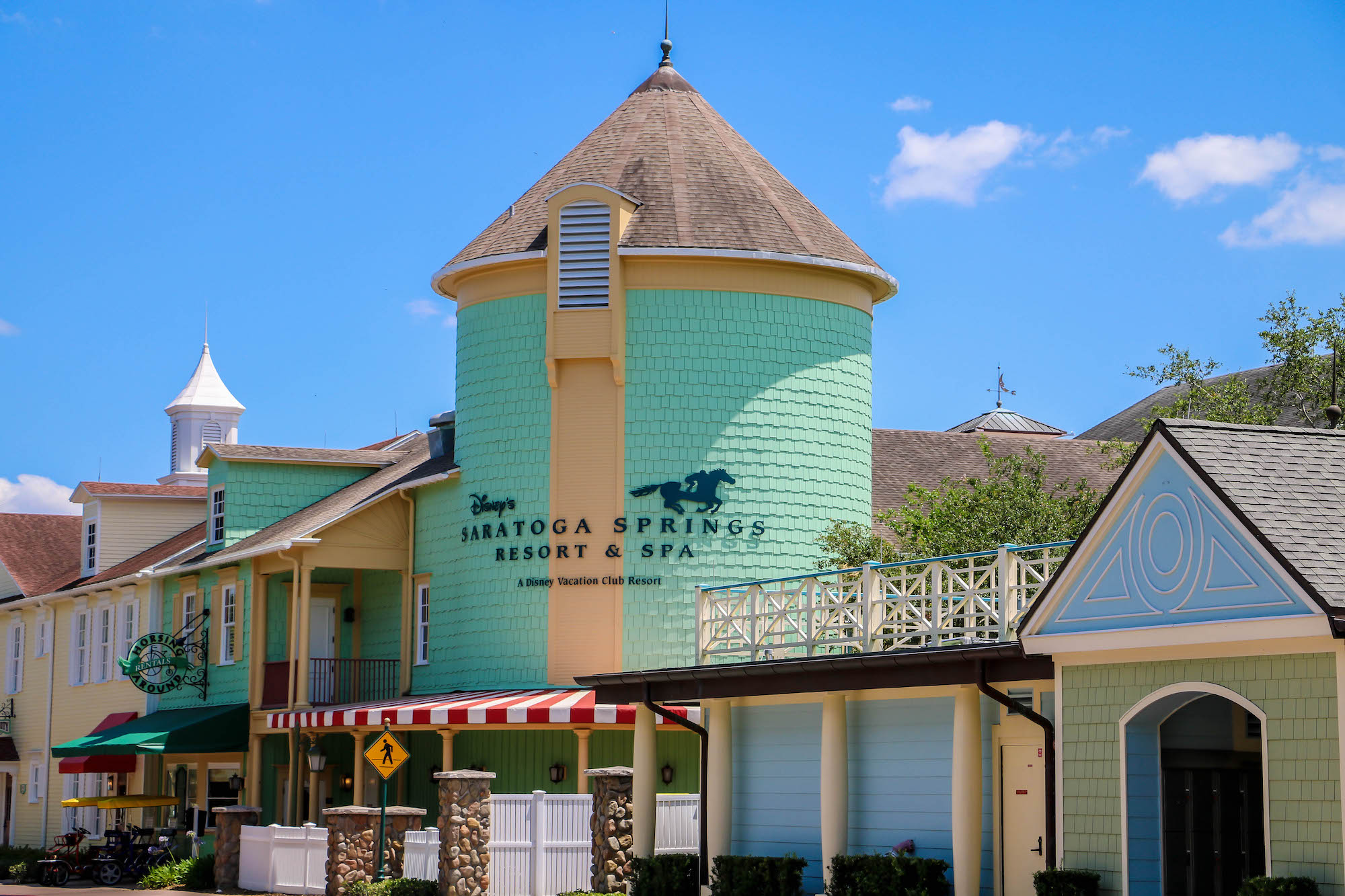 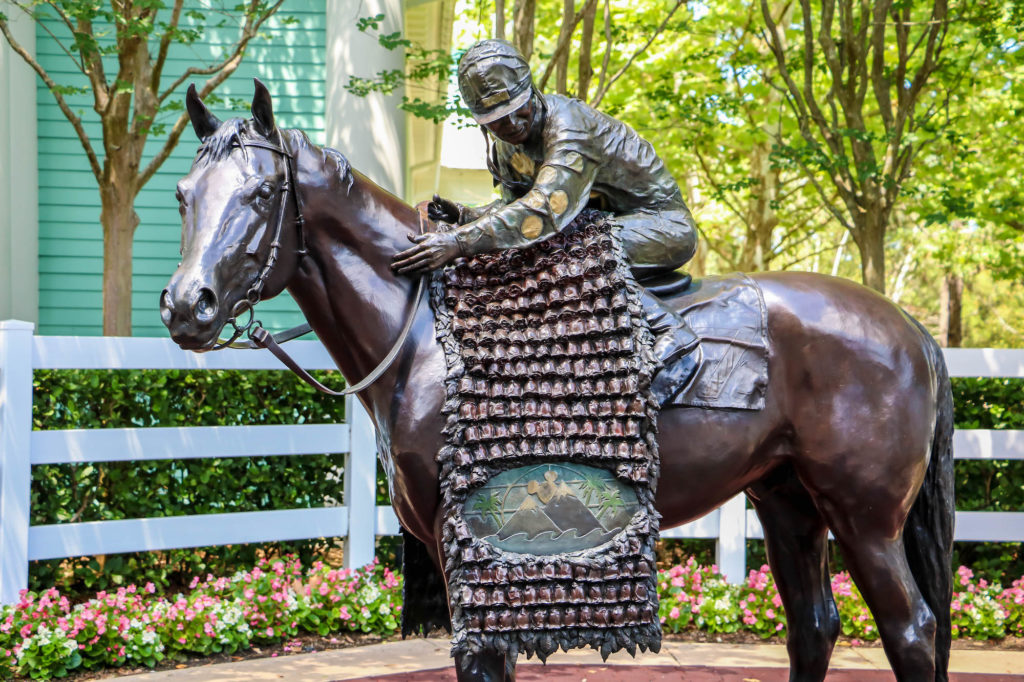 One of the most enchanting DVC resorts on Disney World property, Disney’s Saratoga Springs Resort was designed and inspired by Saratoga Springs, New York. Its namesake is an historic small town known for its thoroughbred horse-racing track and the large tourism industry that the horse races have developed there. At 65 acres it is also the largest of all the DVC resorts. The resort is popular for not only its beauty and theming, but also for the spa, pools, the racetrack clubhouse, and 60 treehouse villas.

Saratoga Springs Resort has a fascinating history, as well. Originally built in the 1970s as a residential community with access to a shopping area called Lake Buena Vista Village. A decade later, Disney executives abandoned the idea, with Lake Buena Vista Village becoming the future Disney Springs, while the residential community was turned into a resort.

In the 1990s, Disney chose to turn the resort into an interactive and educational center for Disney World guests, called the Disney Institute Resort. Finally, after scrapping the institute, the resort officially opened in 2004 as Saratoga Springs, the 7th Disney Vacation Club resort. While much of the resort has changed over three decades, its 60 Treehouse Villas are from the original 1970s version of the resort.

All of these villas, with the exception of the Treehouse Villas, are divided between Standard or Preferred locations. The Standard rooms are located in The Grandstand, The Paddock, and The Carousel buildings (all named after horse and horse-racing areas in New York’s Saratoga Springs).

Preferred rooms are located in The Springs and Congress Park buildings of the resort. Congress Park is named after the Congress Park Carousel in Saratoga Springs, NY, and The Springs has the same name as a luxury apartment building in Saratoga. While guests cannot choose their view, Preferred rooms are more likely to have a Water View, as they are closer to the boat launch, as well as the resort’s main lobby, pedestrian bridge to Disney Springs, and other transportation locations. All of the Treehouse Villas have a Woodlands View, and are elevated approximately ten feet off the ground on beams and pedestals are nestled into the Woodlands along the Sassagoula River.

All the villas have a quaint, cozy feeling and a slight rusticness to them, while the Treehouse Villas are very rustic and homey. The resort has been undergoing renovations since June 2019, and before the pandemic, Disney had announced that this would be completed in 2021. While Disney has not announced any changes to that expected completion date, as of December 2020, two buildings have completed renovation, complete with all new furniture, paint, countertops, and cabinetry. In addition, these villas now have a rustic feeling mixed with sleek and modern luxury. In 2021, the Paddock Pool water slide at the resort will also undergo refurbishment, during which time it will be closed during this time. 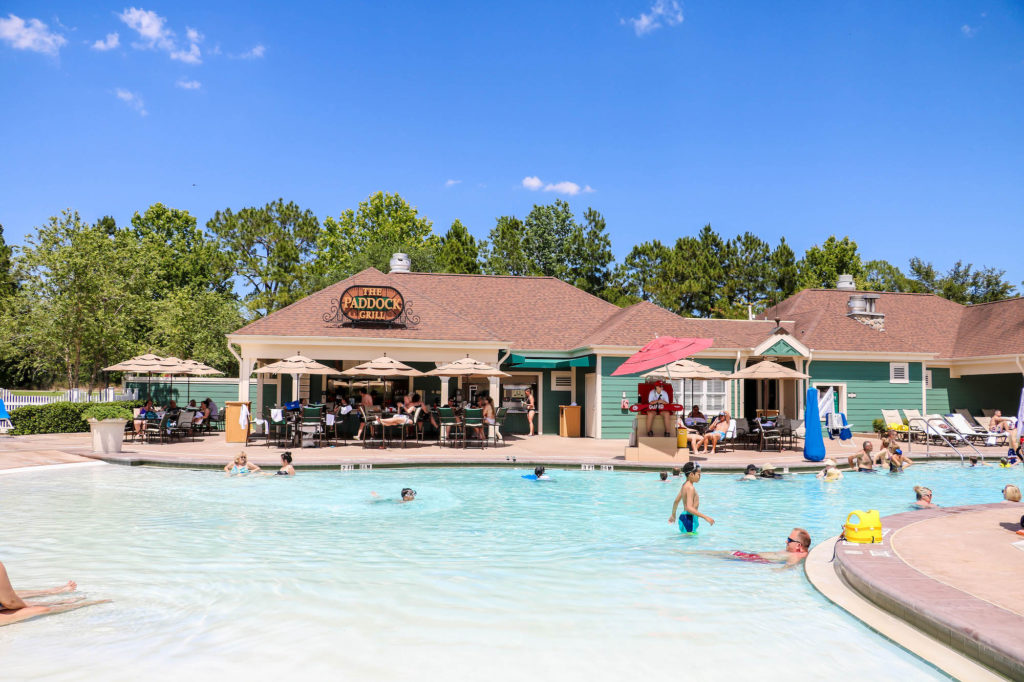 In addition to the plethora of restaurants available just a short walk away at Disney Springs, Saratoga Springs also has three types of dining, with a total of seven different dining locations.

Under Casual Dining, the resort has the Turf Club Bar and Grill, which features a racetrack clubhouse setting with views of both the lake and the Lake Buena Vista Golf Course. Offering American comfort classics, this is the perfect spot to unwind after a long day at the parks or a game of golf.

The resort also has three Quick-Service locations, with the most popular being The Artist’s Palette (inspired by the art culture and galleries in Saratoga Springs, NYC), known for its bright and colorful decor, and as a great place to grab all three meals, most of which are classic American cuisine. In addition to The Artist’s Palette, the resort features Chip ‘n’ Dale’s Cafe, a convenient snack stand for the golfers at the golf course, and which provides snacks until 5pm. By the High Rock Spring pool, the resort also features the On the Rocks Pool Bar, featuring cocktails, other alcoholic beverages andnon-alcoholic beverages for the kids. The Backstretch Pool Bar by the Grandstand Pool is another great poolside option for several entrees, snacks, and alcoholic beverages.

The resort also features two lounges, including the Turf Club Lounge, adjoined to the Turf Club Bar and Grill, offering lounge fare in addition to cocktails, beers, and wines. The Paddock Grill is located poolside, open for all three meals, offering several entrees for pool-goers, including fish tacos. 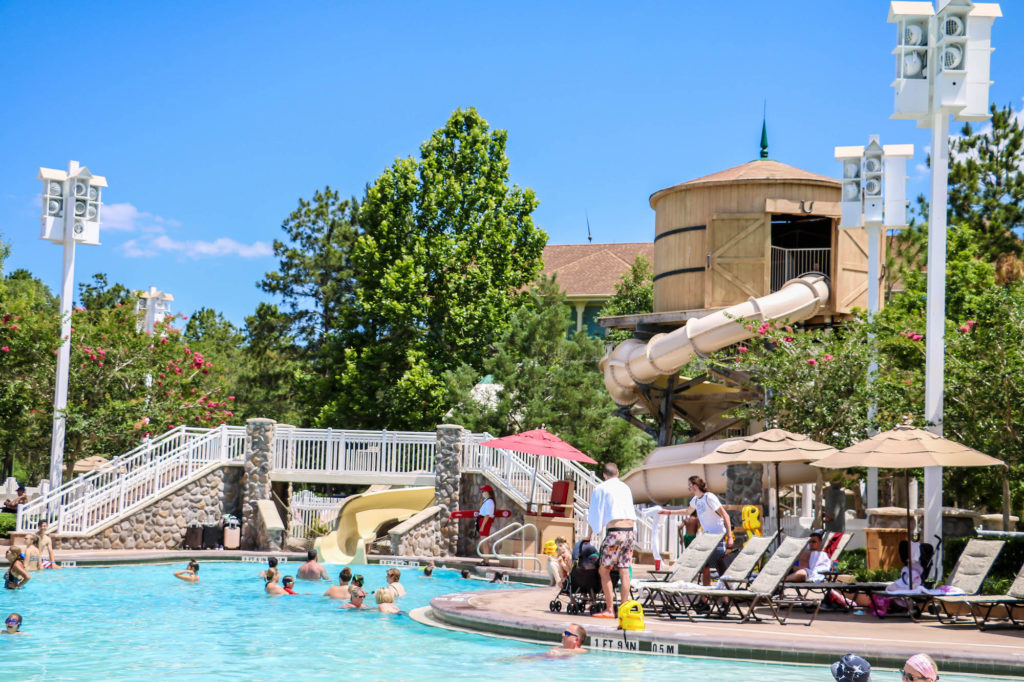 If you love amenities, you’ll love staying at Saratoga Springs. The resort features a total of five pools, with the primary ones being The Paddock’s Paddock Pool, which has a 146ft water slide into the zero entry pool, alongside a horseshoe-shaped whirlpool and two kiddie pools.

Located outside behind the main lobby building and the Carriage House is the High Rock Spring Pool, which features a zero-entry pool with waterfalls and a 128ft water slide built into the rocks.

The High Rock Spring Pool also features a Donald Duck splash area that kids will love, as well as a mini waterslide, and is very close to Disney Springs. There are also three quiet leisure pools throughout the resort, at the Treehouse Villas, The Grandstand, and Congress Park, providing guests plenty of pool options for the Florida summers.

While the resort’s theme can be a bit too subtle for some guests who might not know the history of the resort and the inspiration of Saratoga Springs in New York, Disney’s Saratoga Springs Resort offers quite a lot to its guests. Not only does it have a full-service spa, but it’s also conveniently located within walking distance to Disney Springs.

Many of its villas have been recently refurbished, providing a fresh experience, and it is the only resort on Walt Disney World property to have a villa like the Treehouse Villas, which would make your stay especially unique. Its sprawling grounds can require long walks to the Disney bus transportation options, and the only mode of travel to the parks is by bus, but the grounds also give the resort the space for its multitude of pools and amenities. A stay at Saratoga Springs is guaranteed to be comfortable and interesting, and a great relaxing and fun vacation for you and your family. 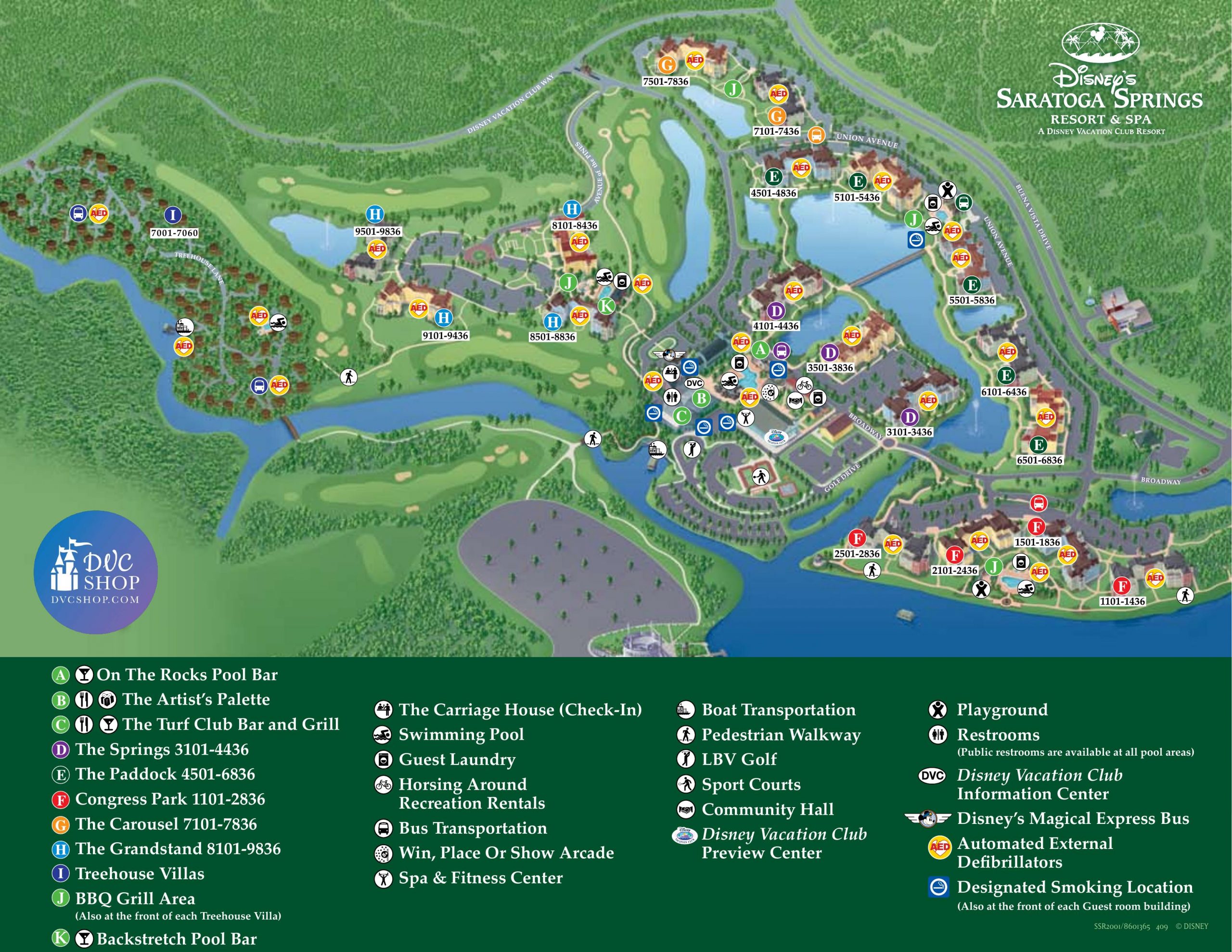 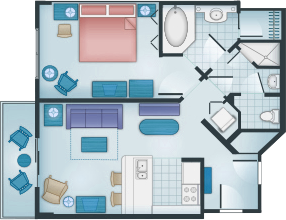 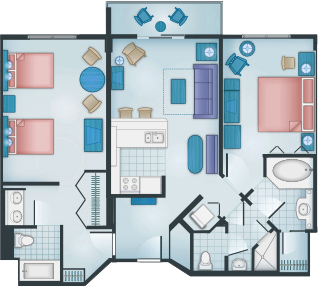 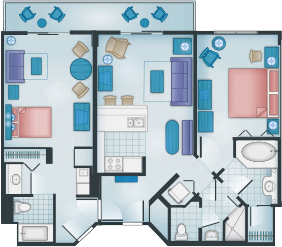 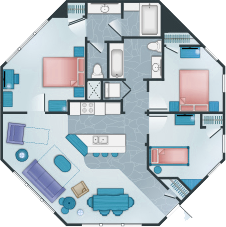